This weeks new Lego set review is set 10245 – Santa’s Workshop. Released in 2014 this Lego set, part of the Lego’s Winter Village Series is recommended for Ages 12 and up. the set comes with 883 pieces. 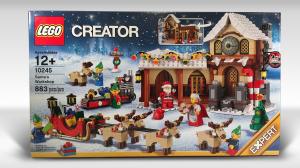 The figures that come with this set are rather fun. Lets take a look at the all of the figures included.

The Mrs. Claus from this set consists of a triangle base. The front has an apron print, decorated with 2 candy canes and some holly on the bottom right portion. The torso is white with a printed pattern that correlates with the base. The minifig comes with a red cape, and white hair as well. Of the 6 minifigs in set 10245 two have double sided heads, Mrs. Claus is one of them. One side is happy the other is an annoyed/un-happy face. She also comes with a cookie tray.

The 4 elves in the set come with green hats and pointy ears. Each elf consists of mini-legs (similar to those used on children minifigs and hobbit sets,) one of four different printed torsos, as well as one of four heads. One of the heads is the other head in the set that has double sided heads.

The Santa’s Workshop set also comes with 4 adult reindeer, a smaller younger reindeer. The four adult reindeer are designed to be standalone or, by removing two, one-by-two bricks, they can be attached to Santa’s beautifully designed sleigh. The sleigh is designed to be have Santa sit in the front while being able to hold four wrapped presents, in varying sizes. among the presents the set also contains a guitar, pink wand, yellow car, and blue spaceship.

Check out the video above to learn more about Lego set 10245.