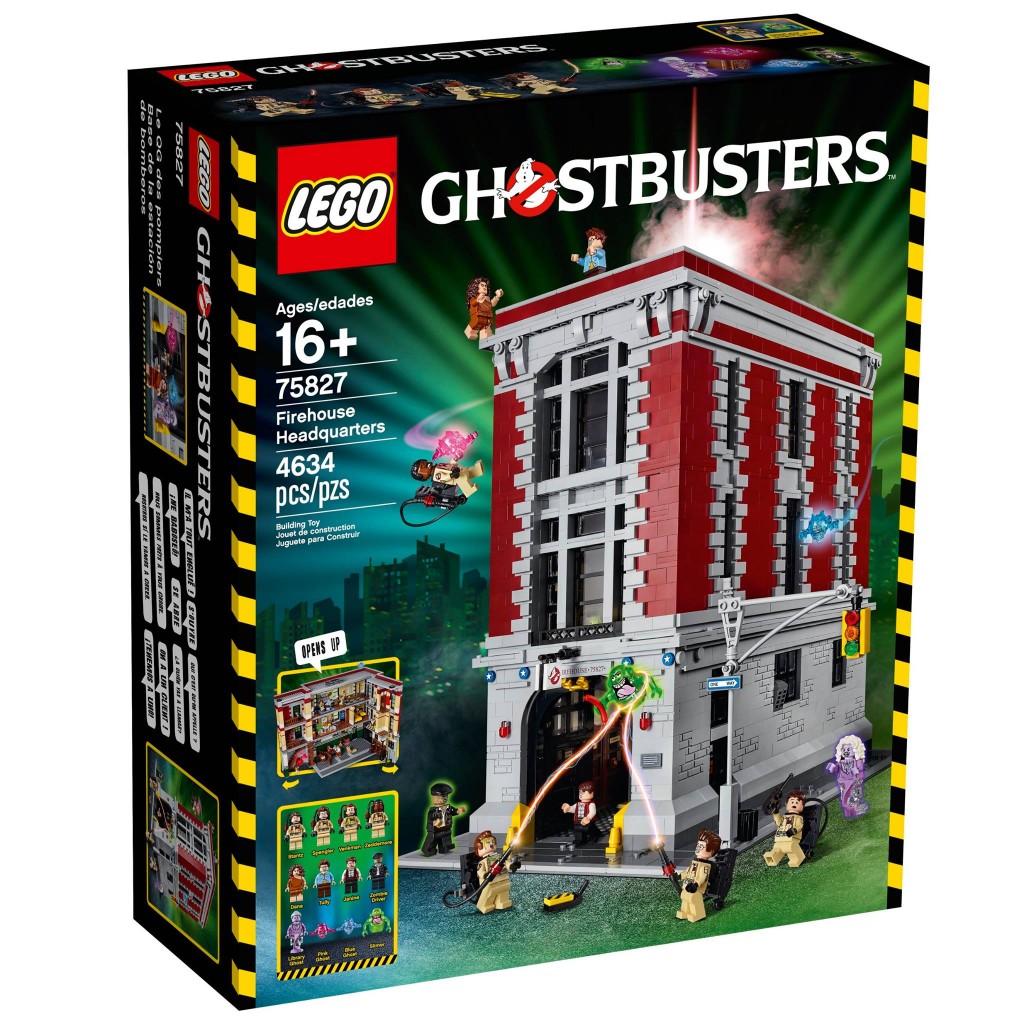 Several weeks ago we got our first glimpse of LEGO set 75827 Firehouse Headquarters. This is the firehouse from Ghostbusters. the first glimpse came after a retailer leaked the announcement. Initially LEGO only showed us exterior shots, strategically placed in-front of the location used in the movie.

On Wednesday we got the a much more detailed look at what we can expect from this set. Starting off we now know that the piece count is now officially known with it coming in at a whopping 4,634 pieces.

First is the four Ghostbusters. Ray, Egon, Winston, & Peter. At first glance it appears that these might be the same figures that were released with the LEGO ideas Ecto one, but upon closer look at the pictures provided we see there are some differences.

On the torsos for Ray, Egon and Winston, the belts have little containers that have red printing, where before they were gray. Also noticeably different is the arms on all four. Similar to the custom printing that had been provided by NACM (appears now they are sold out). While NACM offered left arms with the Ghostbuster symbol, LEGO is printing on both arms. Logo on the left and pocket on the right. They are also printing elbow pads on the arms as well. 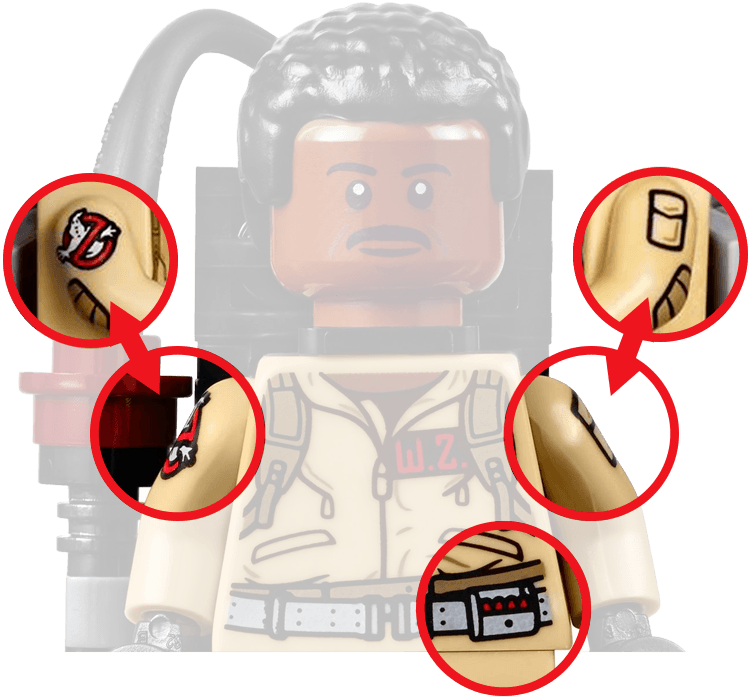 Peter’s torso is also different in that it appears as though he has been slimmed. In the other shots on the packaging we see that he also has a slimmed version as well perhaps the back side of the face. 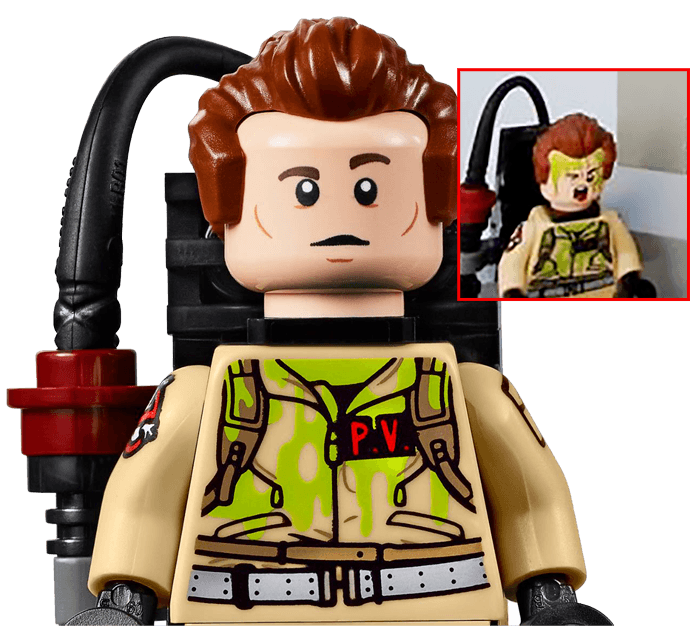 Next is Louis Tully.

I am personally excited for this one as Rick Moranis is one of my favorite actors and it appears to me that this minifugre captures his character from the movie quite well. With the unsure face, to the disheveled stained shirt. it appears that Louis’s head will be double printed as well. With the back side printed for use with the testing helmet as shown in the picture. 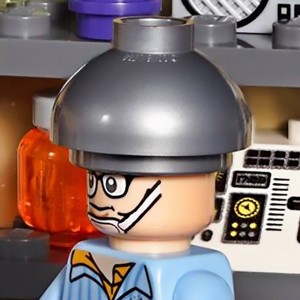 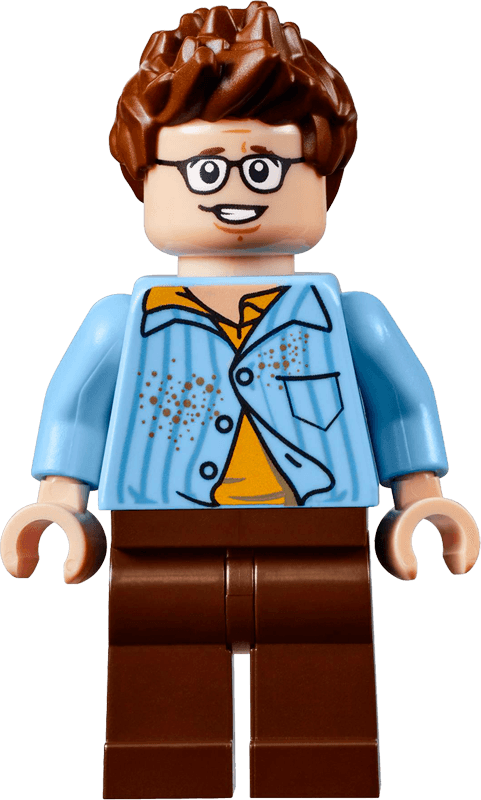 Dana Barrett. Sigourney Weavers character is produced quite well also. Looking more like her Zulu the Gatekeeper portion of the movie. it appears if we look closely at the packaging that her face is double printed well.

Played by Annie Potts looks ready to yell “WE GOT ONE!” the figure comes with a double sided face as well. 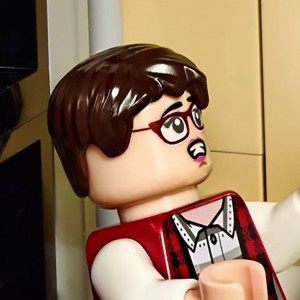 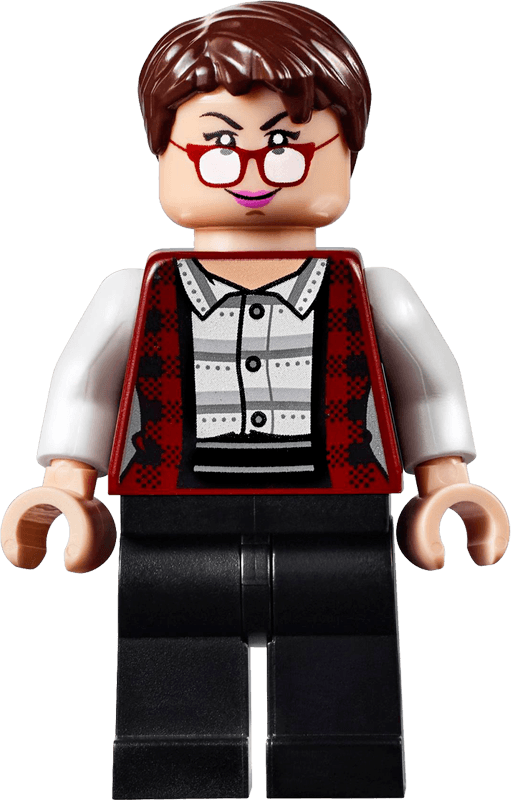 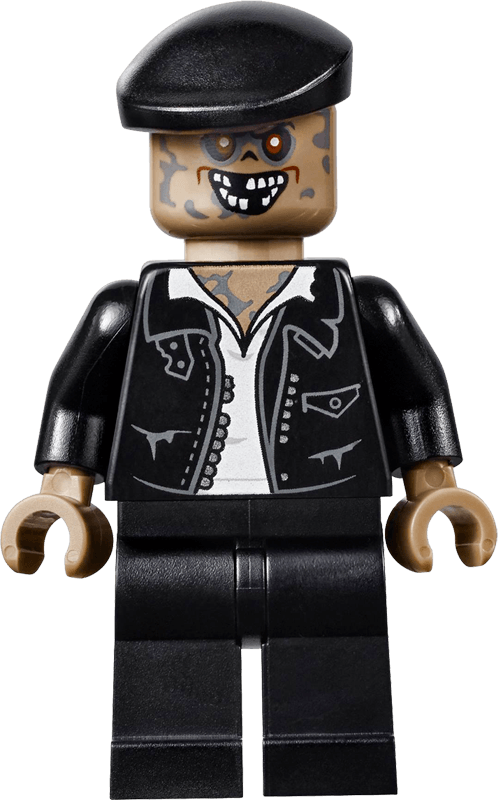 From he opening scene in the first Ghostbusters. She comes with a double sided face and extra wig to help look scary. 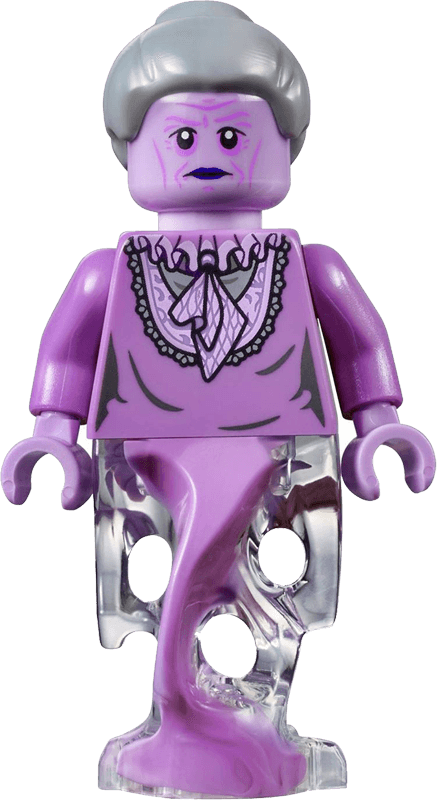 Although never named in the original movie, everyone knows this little green guy as slimer from them hotel scene in the first movie. Made from semi-translucent green material. And comes with food to eat. 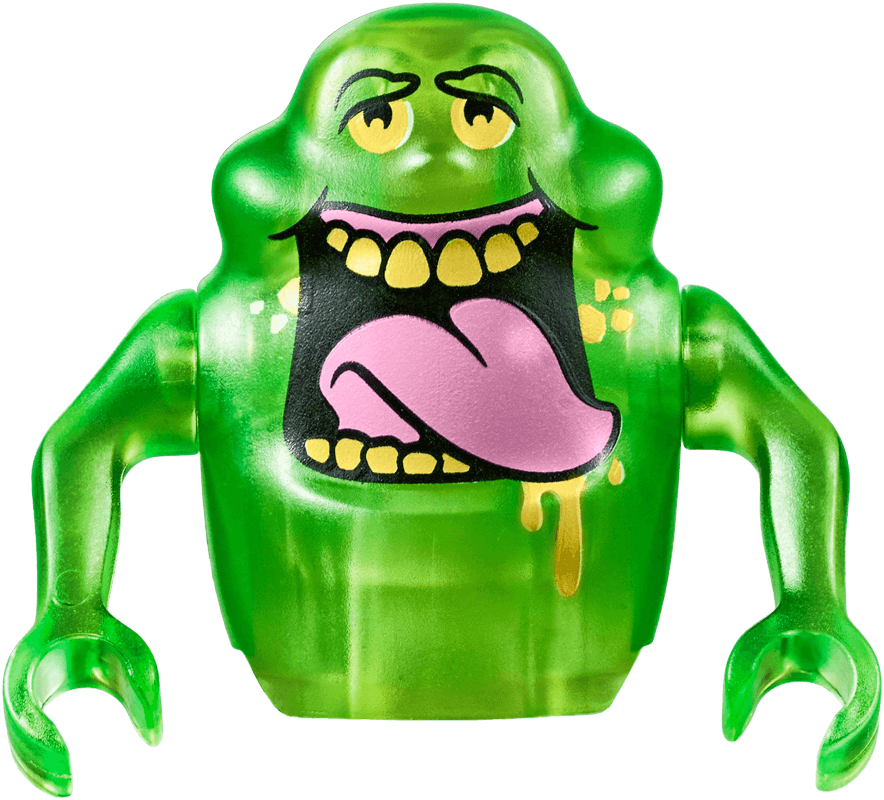 Both made from semi-translucent material as well, these two figures are sure to give the ghostbusters a challenge.

taking look at the photos LEGO released for the set you can tell that The LEGO designers spent some time and effort in planning out the details for the set. Lets take a look at some of the detail they included.

Dancing toaster or game of pool anyone? 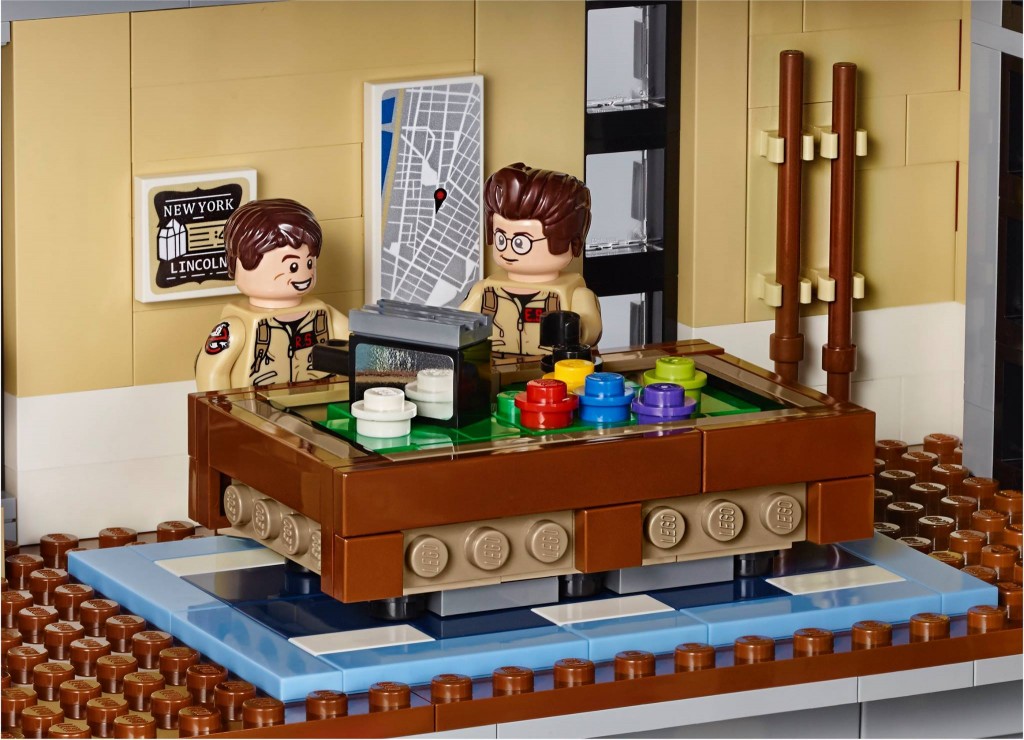 Messed up kitchen with pizza boxes and food? 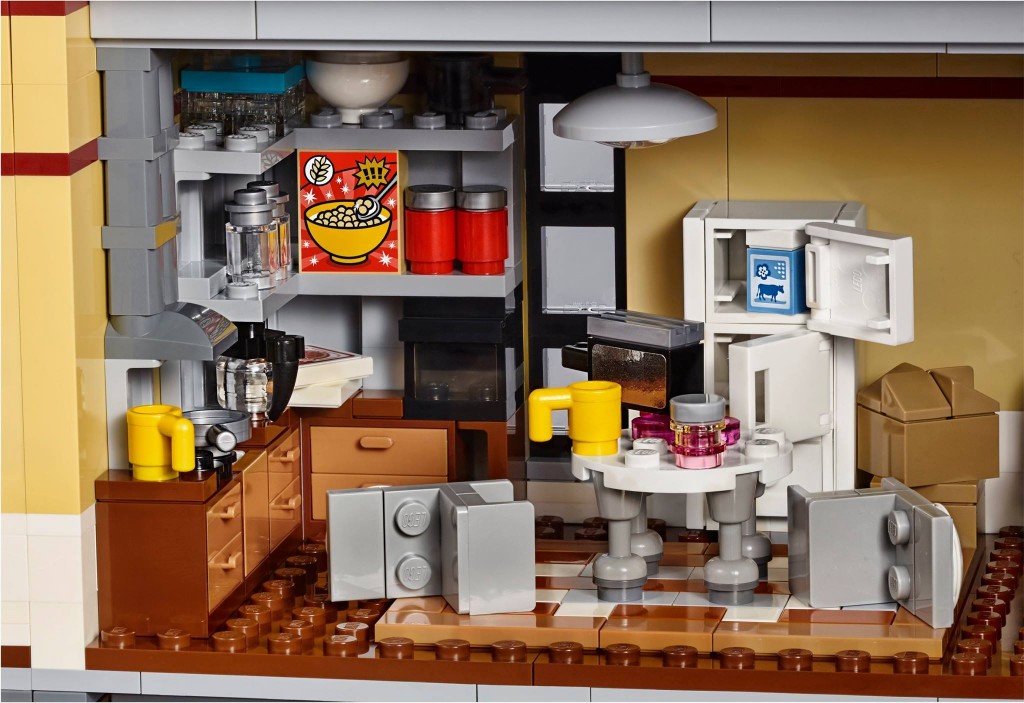 Bathroom with old time toilet and mirror on the wall. 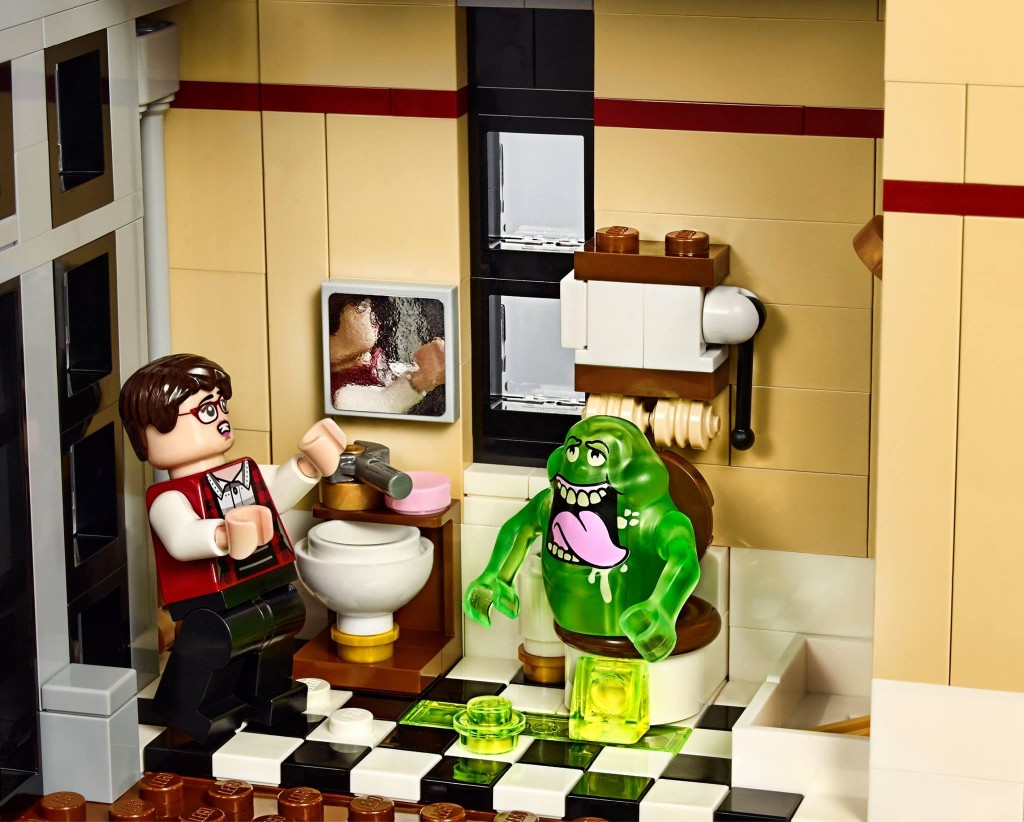 Photo development area to look at those photos of pictures of Vigo the Carpathian. Watch out for the fire! 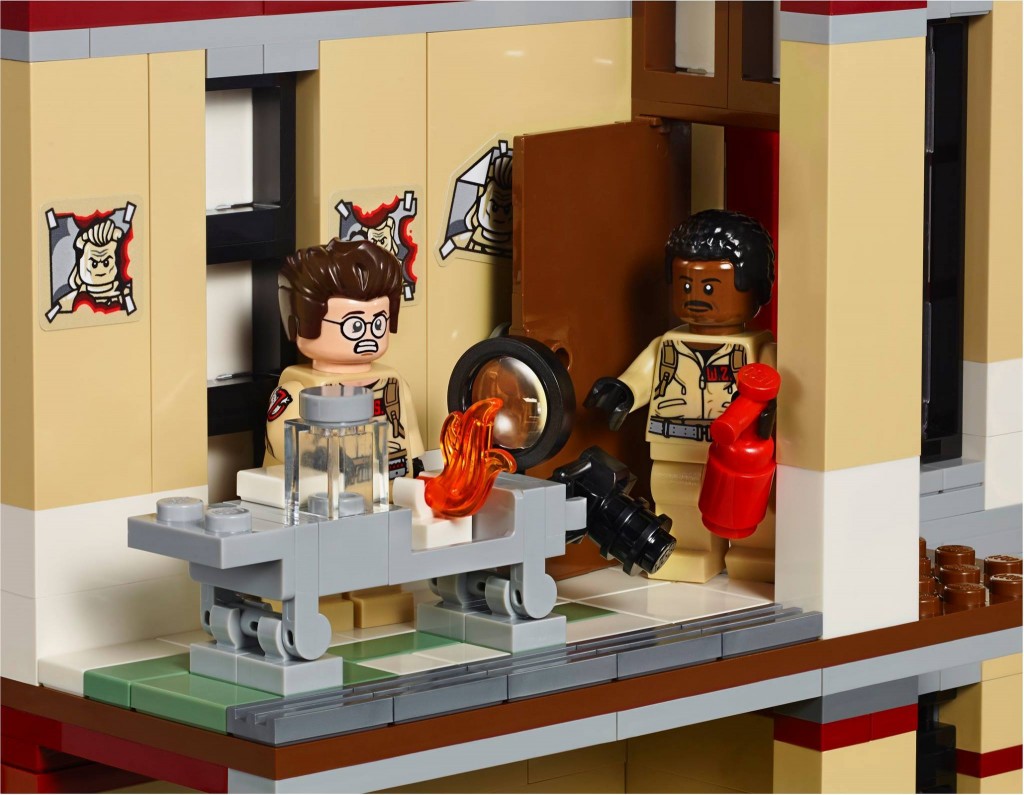 Ghostbusters arcade game. Look out for the Stay-Puft Marshmallow man! 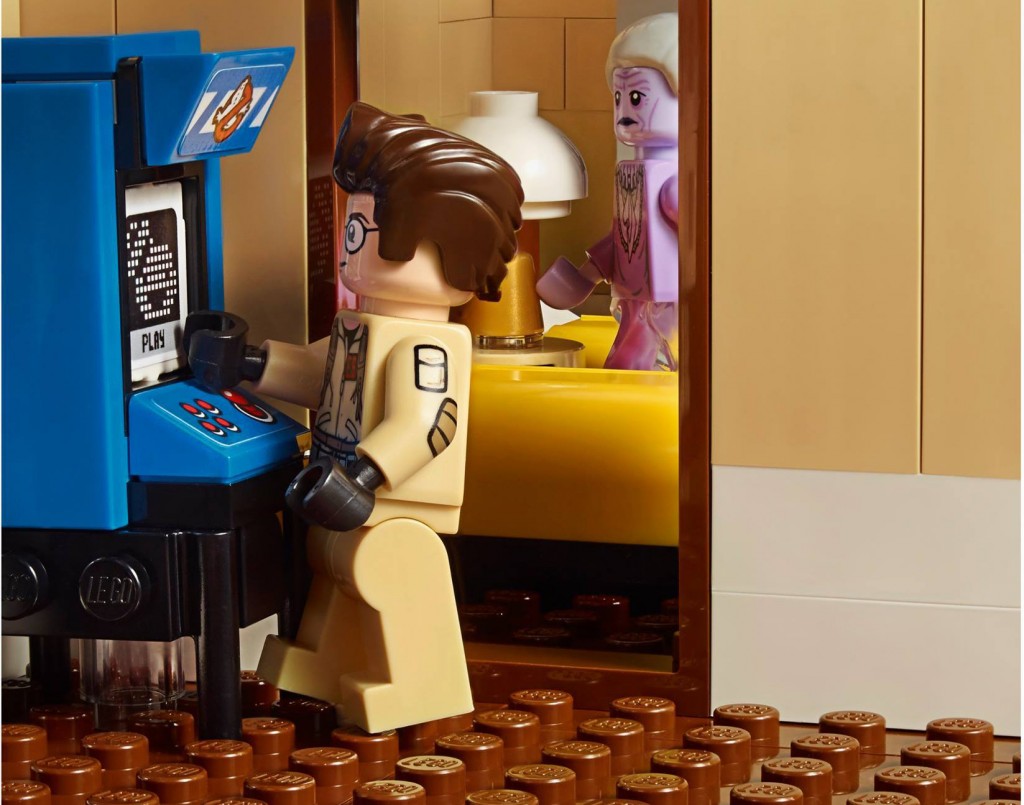 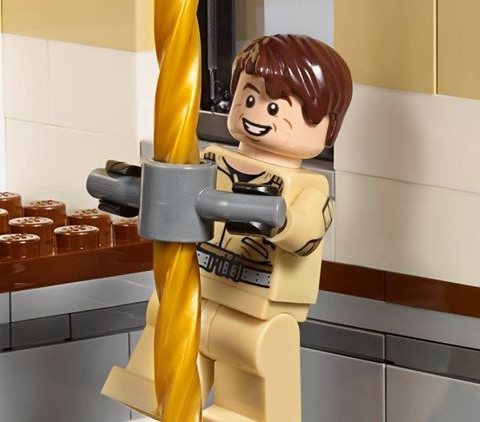 Front entrance, large enough for the Ecto 1 to drive through. 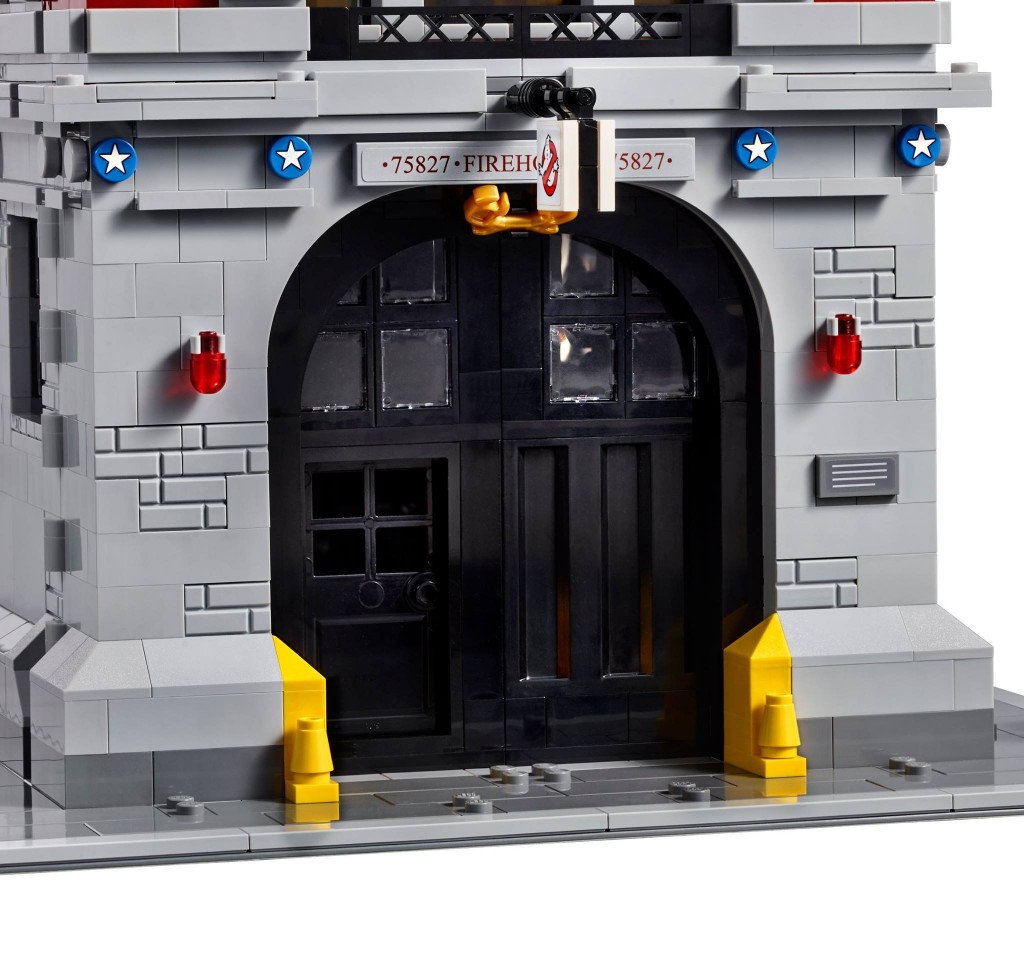 Lab area to see if Louis is ok. 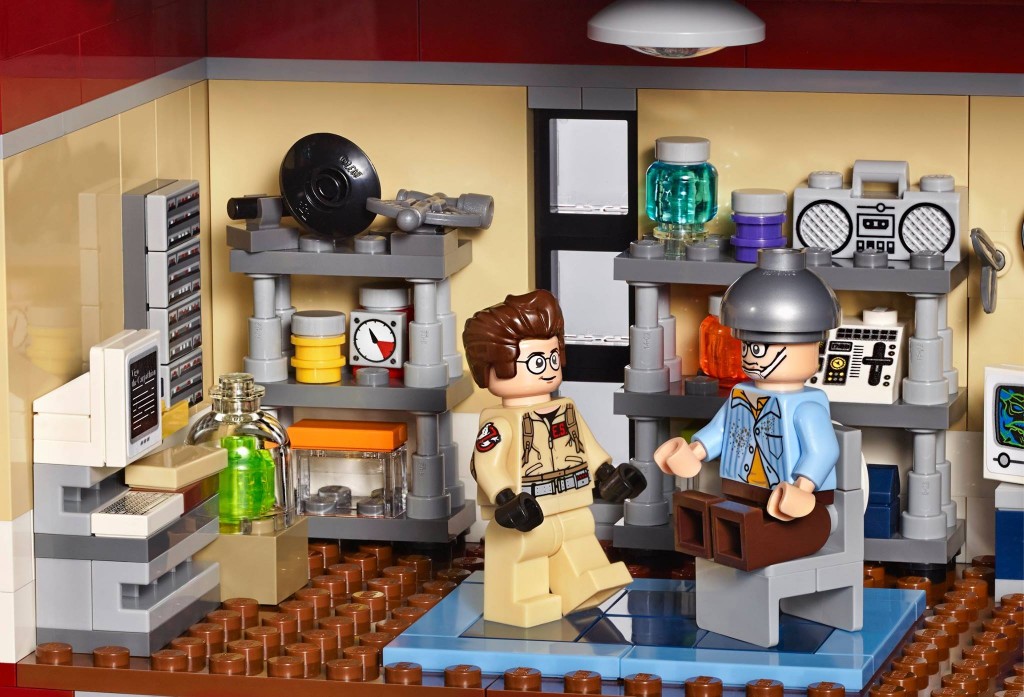 Containment area, gotta keep those ghosts some where. 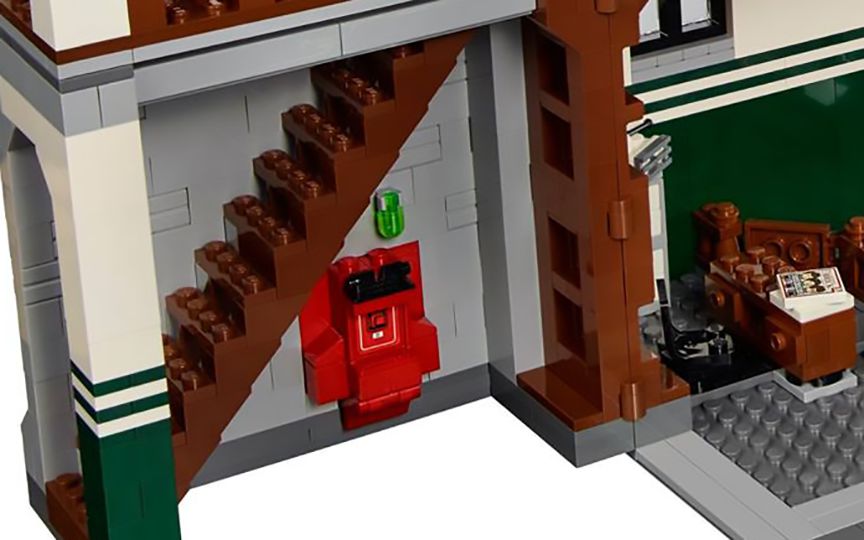 This set also opens up for three levels of play. 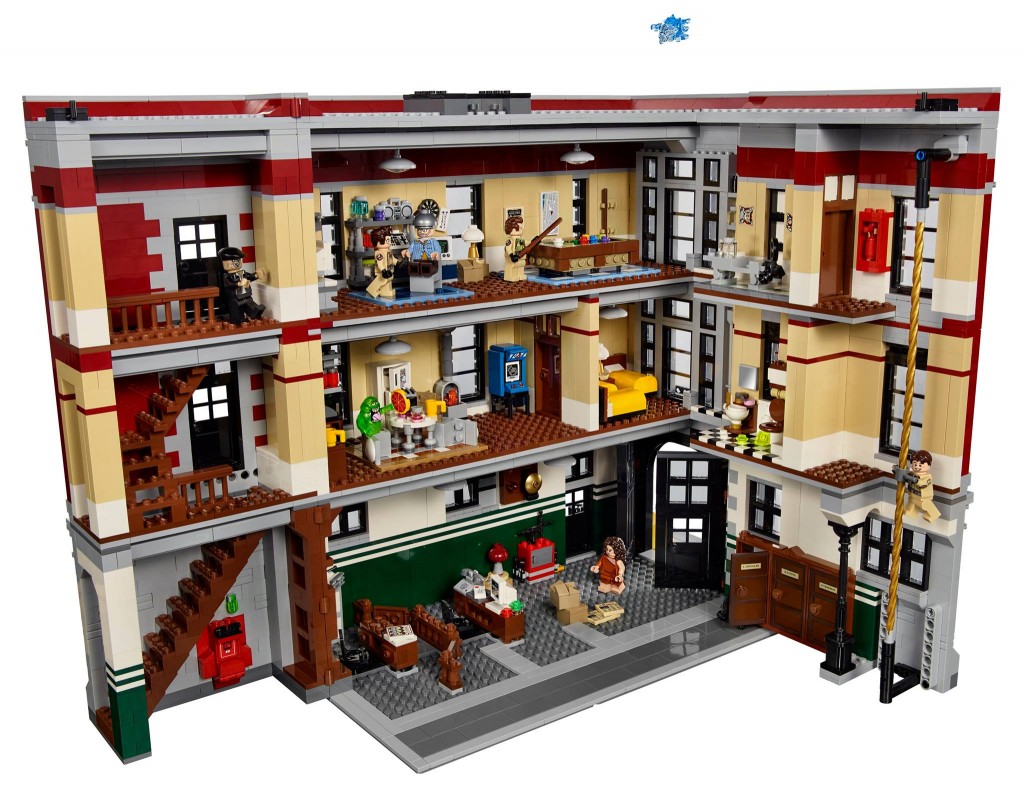 The set is slated to cost $350 pieces this 4,634 piece set, averaging around $.08 a piece. While at first appearance the set might look costly, but when compared to Set 76023 The Tumbler, coming in at 1,869 pieces including only two minifigures with an average cost of $0.11 per piece this set is a good deal.

We will have a more detailed review when the set comes out in January.

Learn more about the Firehouse Headquarters set check out: